Compensation for the Loss You Have Suffered

If you are injured while employed as a longshoreman or dockworker you should consider contacting an experienced maritime attorney. Steven Schletker has been representing injured Kentucky longshoremen for more than thirty years. As an injured dock worker you may be entitled to:

If a dockworker has a pre-existing condition and suffers a work injury, the Longshore Act provides special protection. Under the aggravation rule, so long as the work injury worsens, aggravates, accelerates or hastens the development of impairment, the claim is compensable.

The Longshore Act includes presumptions that are similarly worker friendly. For example, Section 20 includes the presumption that the claim comes within the provisions of the Longshore Act. There is also a presumption that timely notice of the claim was provided to the employer. These provisions were drafted in a long ago era when injured workers, rather than corporations, were protected by Washington D.C. Suffice to say, legislation coming out of Frankfort does not provide similar type of protection to injured land based workers. 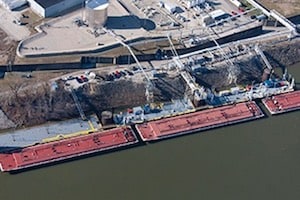 If an injured Longshoreman is unable to return to his/her pre-accident employment the burden shifts to the employer to show suitable alternate employment. This is an important protection afforded by federal law that is not present in a Kentucky workers’ compensation claim. Welders, dry dock workers, barge cleaners, and other workers on or near the water perform difficult manual labor positions. Even a minor injury can prevent a Longshoreman from returning to work. Many Kentucky Longshore operations have a “no light duty” policy. If a worker has an ongoing work restriction of, for example, no lifting over 40 pounds or no climbing vertical ladders, he/she may be knocked out of the pre-accident job. In that circumstance, the claimant has established the basic elements of a permanent total disability claim that must then be overcome by an employer’s substantial proof. Once the Longshoreman establishes his/her work-related injury prevents returning to the pre-accident position, the burden shifts to the employer to identify specific jobs that fall within a worker’s physical and vocational ability. Identifying such jobs can be difficult. If you have been injured in a river related position and would like to review your rights, contact Steven Schletker.